Young people in informality and what we know about their working conditions: Part 1, gathering information

The health crisis caused by COVID-19 quickly turned into a socioeconomic crisis, which has deepened existing social problems. In the case of Ecuador, as in many countries in the Latin American region, informal workers have been seriously harmed by being more exposed to contagion due to the nature of their work, by not having social protection schemes, and by seeing their income level reduced by half or completely ( ECLAC, 2020 ).

Since the beginning of the year, the United Nations has been working on an inter-agency project between the International Labor Organization (ILO), UN Women and the United Nations Development Program (UNDP), whose main objective is to expand targeted social protection to young people between 18 and 29 years old, in an informal employment situation in four cities of the country: Quito, Guayaquil, Loja and Machala. The project acquired even more relevance in the current context due to the loss of job stability and the limited access to social security by this group, which makes it even more vulnerable and, therefore, of priority attention. The project seeks to generate new affiliation mechanisms for young people, promote the transition between informality and formality through training and other mechanisms,

The first challenge of this project is to better understand the range of scenarios that exist in labor informality. Talking about informality has several nuances, from the young street vendor who works from the street, to the young freelancer who offers professional services from home. In order to design the components of the project, it was necessary to understand labor informality in its complexity and diversity, gathering information from young people.

The concept of informality

First, we review what is the national and international regulatory framework that defines labor informality and how it is measured. The International Labor Organization (ILO) defines informal employment as the execution of a job without access to labor benefits such as maternity and paternity leave, paid vacations, severance pay among others, of these benefits the most important is affiliation to the social security, which ensures retirement pensions mainly. Ecuador has national statistics that measure, according to the INEC definition, employment in the informal sector, - that is, employment in companies that do not have a single taxpayer registry - but no statistics are available on informal employment.

To collect information on young people in informal employment, it was decided to work with a simplified definition of informality, that is, an informal young person is a person who works and is not affiliated with the Ecuadorian Institute of Social Security. The information was collected through an online survey of 35 questions, to know the occupational characteristics, the social security culture, and the characteristics of the household and socioeconomic of this population group. This lifting exercise faced a double challenge. On the one hand, gathering information on vulnerable populations is always a challenge since it is difficult to identify and contact them. On the other, collecting information online with more than 10 questions reduces the response rate by 75%.To overcome this challenge, four creative and complementary strategies were implemented to disseminate the survey in the four cities of the project.

Bearing in mind that the interest group is young and that 9 out of 10 young people uses social networks, the survey was socialized through the UNDP institutional page on Facebook and Instagram. Through these two networks, announcements were sent promoting the survey in the personal account of young people between 18 and 29 years old in the four cities of interest. This exercise allowed us to realize that the algorithms used by Facebook and Instagram are not precise enough to identify young people in informality. In addition, ads with different characteristics were displayed, testing which of them best captured attention. Two types of ads were developed: images with people and short videos with characters. Higher ad engagement and survey response rate were obtained when using videos as visual material. Finally, to encourage them to complete the survey, a draw for a year of training in online courses in areas of their interest was promoted.

Likewise, there was the collaboration of government institutions and civil society organizations that work with young people in the informal sector to disseminate the survey from their contact lists. Finally, to encourage them to complete the survey, a year of training in online courses was also promoted. 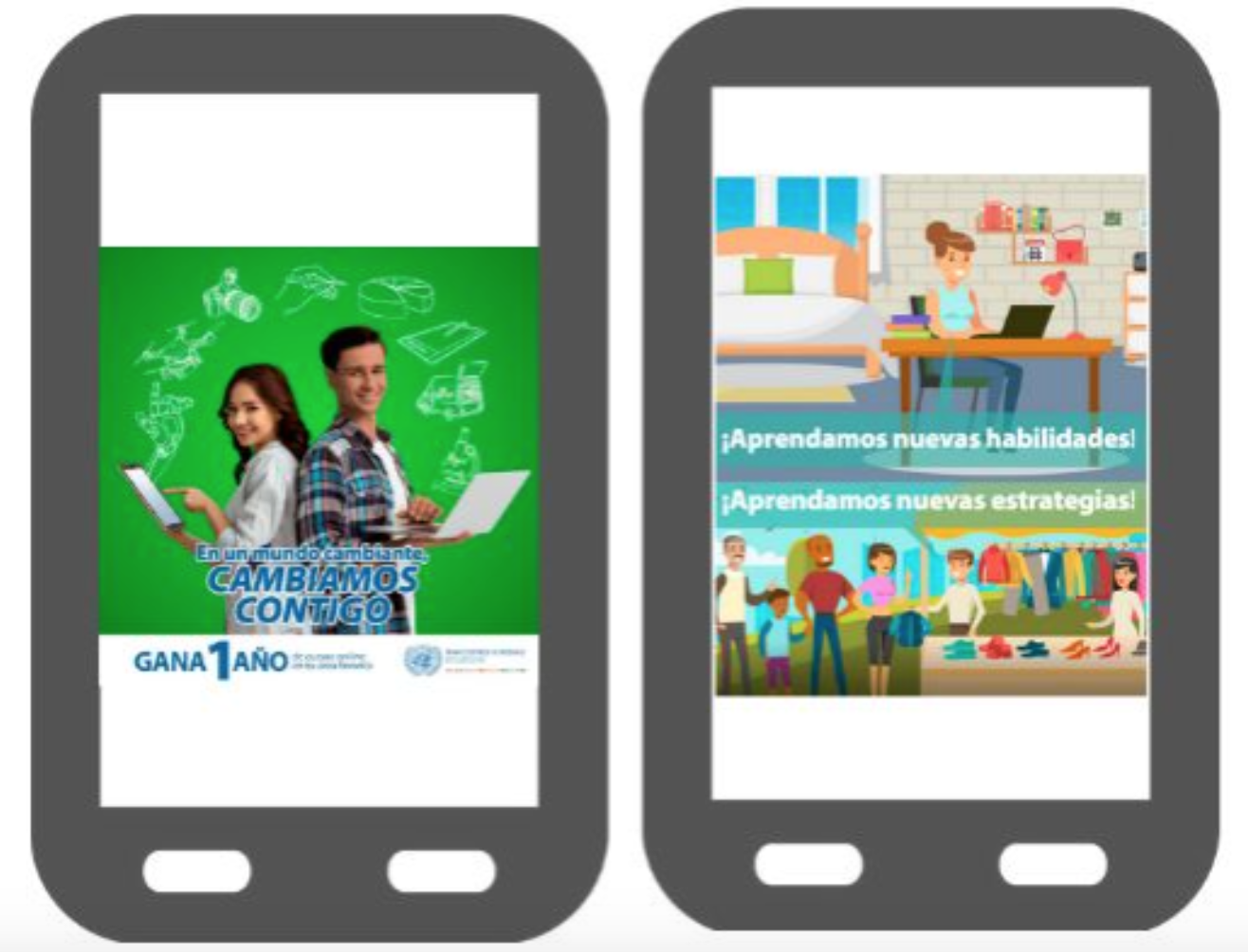 A. Images used for the campaign on social networks

+ 3. Other digital platforms for young people

An alliance with UNICEF was created to send a message through its U-Report chatbox on Facebook inviting them to complete the survey and encouraging them to do so by raffling one year of online course training.

Given that 80% of young people have a mobile phone, a strategy was developed, together with Telefónica, used for the first time to collect information from such an “extensive” survey for a development project. The strategy was to send text messages in the age range, cities of interest, and those belonging to a low and medium socioeconomic level that invited them to visit the survey campaign for free megabytes on the Telefónica website. Once on the website, the young people received megabytes for answering two filter questions, which allowed us to identify if they had an informal job, if they did, the link with the survey questions was shared with them so that they could complete it and be I rewarded them with megabytes.

In conclusion, the key elements of this information gathering were: i) mix several complementary survey dissemination strategies and ii) handle a communicational message adjusted to the labor reality of youth and the context of a pandemic (“From the UN we are thinking of you! We want to know more about your work and how the COVID-19 context has affected you. ”), accompanied by an interesting incentive that is in line with the project's objectives (one year of online course training). This information gathering has given us some lessons on how to reach such a heterogeneous and priority population group, as well as on their situation and how the pandemic has affected them.